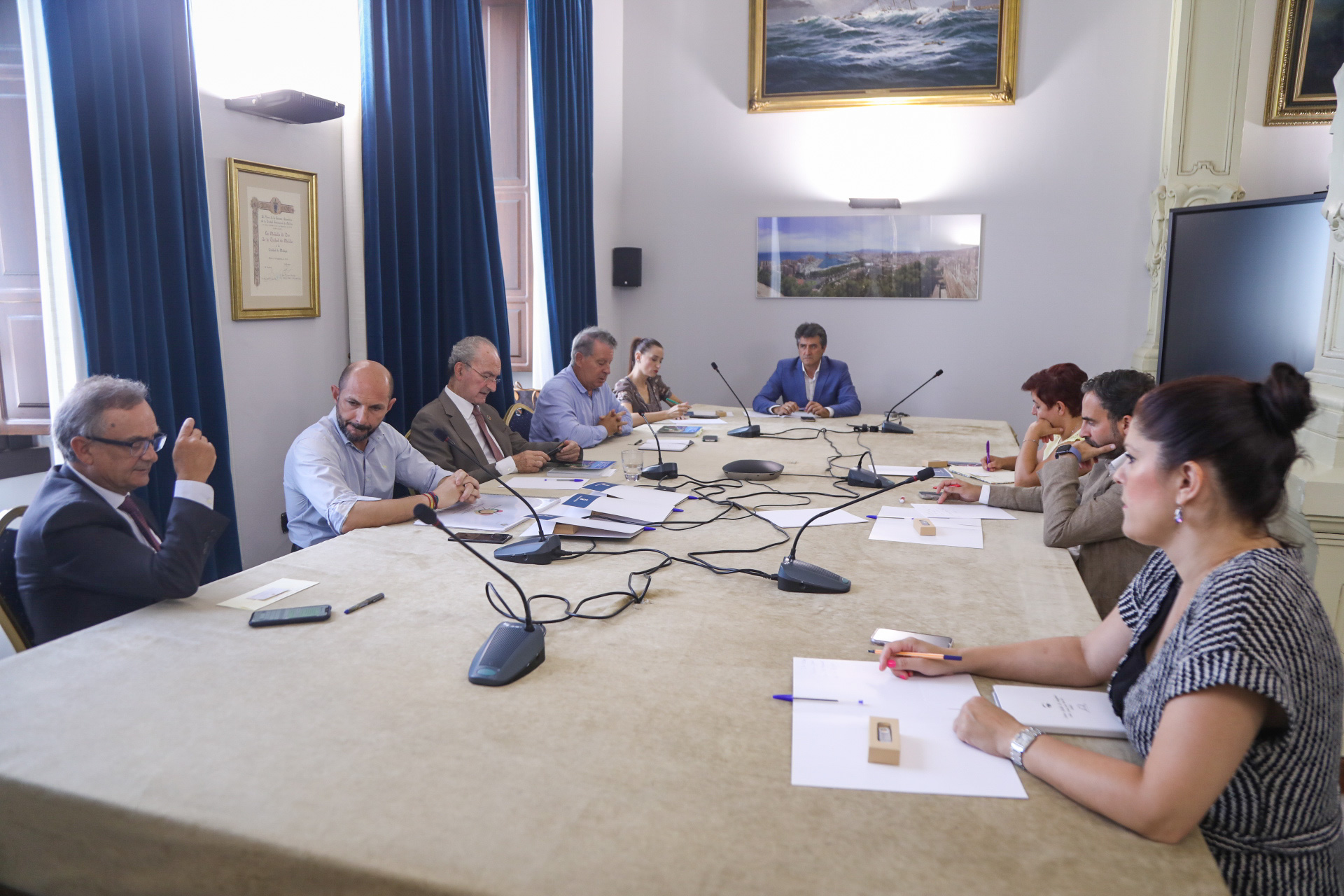 The mayor of Málaga, Francisco de la Torre, has held a meeting today with the spokespeople of the political groups that are represented in the city council. He gave the 2027 Expo Málaga candidature dossier to them, which was presented and defended before the Bureau International des Expositions (BIE), in accordance with its schedule to choose a host country.

The 265-page dossier is the work of a multidisciplinary team that describes the city, the theme, the Expo space, the opening times, post-Expo uses and includes estimated visitor figures and the economic impact the Expo could have over 15 chapters as required by BIE specifications.

It explains that “The Urban Era: towards the Sustainable City” would take place in Málaga from 5 June until 5 September and this Expo’s raison d’être is its theme, as it affects all countries and organisations across the world. To that effect, there would be only a matter of two decades between Málaga’s Expo and the 2010 Shanghai Expo on the future of cities, during which time the world population will increase by 1.6 billion inhabitants, most of whom will live in cities. That is, by 2050 more than three-quarters of the world’s population will live in cities and there should be a space to reflect on how to make population growth compatible with sustainability.

Málaga’s Expo theme, therefore, affects all countries no matter how developed they are, posing the challenge of using innovation as a tool to change the model, which should take the UN’s 2030 Agenda for Sustainable Development as a guide. The sub-themes – citizenship, innovation and the environment – will be developed alongside the main theme.

The dossier outlines the reasons why Málaga deserves to be the 2027 Expo host city:
- It is a pioneer in developing Smart City projects;
- It is a benchmark for urban displays and pilot projects;
- Many multinationals have chosen Málaga to open R&D&I centres (Google, Dekra, TDK, Vodafone, etc.) and has hosted specialist events (Greencities, S-Moving, Transfiere, DES, etc.);
- It is a leader in attracting and retaining talent and applying new technologies in public services;
- It has received recognition for its good environmental practices;
- It has a sound strategic plan based on the United Nations’ Sustainable Development Goals (ODS);
- It is committed to education and research to improve life quality;
- The city has proven it can organise large-scale events (Japan-Spain Summit in 2017, the World Transplant Games in 2017, the Spain-United States Forum in 2014 and the Spain-France Summit in 2017, among others);
- Málaga has a first-class infrastructure and a strong tourism industry.

The dossier promotes Málaga, Andalucía and Spain as a host country. It highlights the political and social support for the project, on which Málaga City Council, the Spanish government, the Andalucían Regional Government and the County Council are working together. It also highlights the positive aspect associated with the fact that the institutions are led by various political parties, and every political stance is covered, meaning that the project would not be at risk if there were to be a governmental change in any of the institutions.

The dossier also includes a communication plan and recalls that the organisation has been working on the 2027 Expo Málaga’s digital presence since 2020 and has active profiles on the main social media networks, as well as an informative website in Spanish and English (https://expo2027.malaga.eu/en/).

Furthermore, the document states that Expo 2027 Málaga will be an opportunity to prominently show Spain’s interest in keeping and strengthening its international relations, tightening the ties with some countries with which it regularly cooperates and opening new cooperation avenues with others. To this end, the Expo will include countries with any level of development and a special cooperation programme will be set out for developing countries to ensure their presence at the Expo. A document is being prepared regarding this matter, which will be submitted to BIE at a later date (in line with BIE’s timeline).

In line with BIE’s regulations, copies were submitted in English and French: including 30 books (15 in English and 15 in French) and 185 pen drives, which included the Spanish version too.

LOCATION AND DESCRIPTION OF THE LAND USE

The plot of land that would accommodate the Expo 2027 Málaga has a surface area of 250,000 m2, strictly speaking, and is located in the Buenavista area (Campanillas district) to the west of the city. However, the Expo’s total usable surface area is 800,000 m2, since it includes land to the west and the east of the main plot of land, which will be used for logistics and housing, respectively.

The Expo would, therefore, be located on a plot of land that is located within the city’s productive triangle: adjacent to the University of Málaga, Andalucía’s Technological Park, the main business parks, the airport and the Trade Fair and Congress Centre.

This location has many advantages, as it will help maximise the benefits after the Expo. Furthermore, the area already has most of the necessary transport infrastructure in place: airport, railways and the metropolitan area’s main motorway junctions. The latter is particularly important, as this location reinforces the metropolitan nature of the Expo, as it would be close to towns such as Alhaurín de la Torre, Torremolinos and Cártama.

More specifically, to the north of the plot of land is the growing University, to the east the industrial estates Cártama and El Viso, to the south is the old Azucarera sugar factory and to the west is Málaga’s main ring road (A-7). The spacious green area, the Vega del Guadalhorce (approx. 90 Ha) is a dominant part of the landscape within which the site lies. The planning project is on two timelines: one with a clear deadline of 2027 when the Expo will take place, and another, more gradual one to accommodate the city’s natural growth.

A clearly defined perimeter barrier will be put around the 250,000 m2 of land comprising the venues so that entry can be controlled. The venue will be circular, approximately 560 m in diameter, to which three smaller circles will be connected, serving as entrance areas.

With the Merino stream serving as its axis, the central space is circular with a radius of 220 metres, creating a surface area over of 150,000 m2. This will be the heart of the Expo 2027 Málaga where open spaces for events, multi-purpose plazas and the auditorium will be located. In addition to hosting many daily activities, at the end of the day, this central space will serve as a large stage area where shows will take place. It will feature shaded spaces and, giving continuity to the topography especially focused on the recovered Merino Stream, will be a large, wooded space. The constructed area inside this circle measures 13,500.30 m² corresponding to the three thematic pavilions (citizenship, innovation and the environment). Taking advantage of the natural slope, an amphitheatre measuring approximately 4,000 m² able to accommodate 3,000 seated spectators will also be included in the central space. Small pavilions with cafeterias, restaurants and rest areas will also be found in this space.

Adjacent to the central space, two non-concentric circles form a ring (average width of 34 metres) housing the Expo pavilions on two levels. There is also a lower level (basement) which will be used as a service car park and storage area. This ring, containing a radial structure, occupies a floor area of 60,000 m² (which will be extended depending on the number of participants) and is pierced vertically by the eight internal communication shafts.

The dossier explains that the Expo itself is set within a large green space – the Expo’s green lung – as an element that connects the routes and content. The recovered stream is a structural element from an environmental point of view that guarantees ecological sustainability (reuse and recycling by means of tertiary water treatment reducing wastewater’s pollution load). Riparian and lacustrine vegetation abound in this area. Flora from every continent or area will be represented with trees, bushes, vines and herbaceous plants, reproducing ecosystems and turning them into a learning space. This green space will also be one of the best legacies that the Expo 2027 Málaga will leave for the city.

In accordance with the dossier, the Spanish government will create a Public Company, which will be responsible for organising Expo 2027 Málaga. This private-law company will be formed to expedite the organisation of the Expo and the main public institutions will be shareholders.

It also includes a draft Accompanying Plan with the infrastructures and investments that should accompany the event. This first list includes projects for the different administrations involved, related to the maintenance of the grounds and the need for infrastructures and specific projects, such as:
- the A-7054 road;
- building 1,440 homes;
- a feasibility study on expanding the C-2 suburban train line, which would ensure that citizens of Málaga and the Valle del Guadalhorce could reach the Expo 2027 Málaga by train;
- building pedestrian access (under or over the A-357 motorway) and a bike lane from the last Line 1 metro station at the University of Málaga (Málaga Tech Park) to the area north of the Expo 2027 Málaga;
- building the connecting road from the northwest ring of the Málaga ring roads with the connection point of the MA-20 and A-7 and the Coastal Axis,
- building Málaga’s new Auditorium (Port area in San Andrés) and the expansion of the Trade Fair and Congress Centre to meet the high demand for conferences, seminars and technical meetings that will arise in relation to the Expo 2027 Málaga’s theme during the three months that it will take place, especially June and the last 20 days of the Expo.

Based on data regarding residents of the city of Málaga and its province, the rest of Andalucía, Madrid and the rest of Spain, and considering annual tourist figures (Spanish and foreign) visiting the city of Málaga and the Costa del Sol, approximately 3.1 million people are expected to visit the Expo, producing a total of around 7.5 million visits.

It is estimated that there will be a total of 131 participants at Expo 2027 Málaga. They will include countries, international organisations and NGOs (grouped in one pavilion) and four will have a given theme. In addition to these, there is the Spanish pavilion and the 19 autonomous community pavilions. Participants will have pavilions measuring 1,000, 750 and 500 m2. There will also be collective pavilions of up to 2,500 m2.

For logistics and protocol reasons, given that it is the host country, the Spanish pavilion will be 2,500 m2 and each Autonomous Community will be allocated a 500 m2 pavilion.

The dossier explains that, based on planned investments, the total company capital should be in the vicinity of €540 million. This figure should be enough to finance approximately 90% of the necessary investment at the Exposition venue. The remaining planned investments shall be financed through contributions from corporate sponsors.

Expo 2027’s total financial resources and revenue is estimated to be €861.8m, while expenditure would be €256.7m. This shows that, in summary, assuming that accelerated depreciation is applied, the exhibition will obtain a positive result amounting to €0.7m.

The dossier is available in English, French and Spanish on the official Expo 2027 Málaga website: https://expo2027.malaga.eu/es/oficina-de-prensa/documentacion.